FROM DEVOTION TO SOLID BRASS 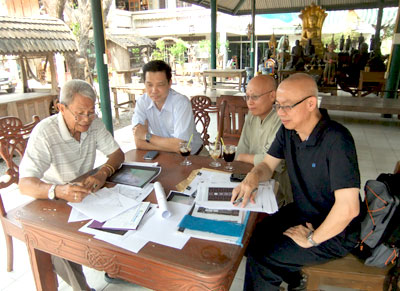 What started as an introduction to the artist/sculptor who was previously commissioned for Buddhist Fellowship’s main shrine Buddha statue, inevitably landed me as part of a group embarking on a journey searching for that core symbol and object of veneration, in tandem with the completion of PBSS’s new building at 25 Lorong 22 Geylang. We set out with clear objectives but we did not know what to expect at the end. With Venerable Guo Hui, Yun Qiang our current PBSS President and Hoo Seng, our past President in the trips to meet and work with the artist, we had quite a memorable and fruitful journey. The following is a brief account of our journey.

When the question was first asked as to what the Buddha image for PBSS’s main shrine should look like, the initial response was then to follow the centre’s existing main image which was along the tradition of Burmese white marble carving. Elegant and beautiful in its own ways, such statues were commonly adopted for Chinese Buddhist temples in the pioneering years of Singapore, including many parts of Malaysia. Ironically, Myanmar (or then known as Burma) is predominantly Theravada in their Buddhist tradition while our pioneering Chinese Buddhist compatriots were predominantly Mahayana in tradition. Such irony is testament to the pragmatism of Buddhists and the ideals many broad minded Buddhists would advocate on the philosophy of “Ekayana” (literally “one vehicle”) or what I would elaborate as “one goal, many paths”. Putting definitions aside, it is undoubted that the Burmese White Marble Buddha is an image that many can connect with at once. Defined by simplicity of the proportion, sharp facial features, distinctive Burmese crown and the often elaborate folded robes over the shoulder and at base of the lotus seat.

The requirement to follow the Burmese statue tradition was promptly conveyed to the artist when we first met him in 2 December 2013. Khun Laem Sing as he is addressed locally, probably in his late sixties, is mild mannered and soft spoken with a constant and pleasant calm inner smile. He demonstrates as a person with wealth of experience in his trade. When we first met him, we had the full confidence that he is up to the task required of him and that he will complete the job for us. 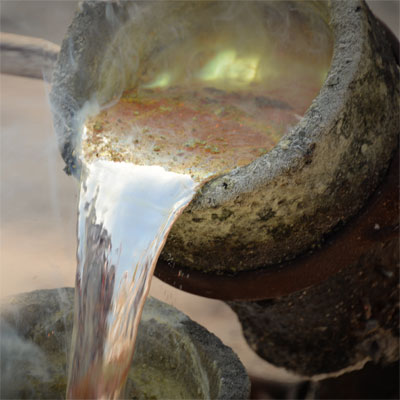 The connection to the artist was possible thru’ one of Buddhist Fellowship’s local Thai friend called Vilai Kadavanich Jarutawee whom we fondly address as Ms Vilai. A Thai Chinese, the sprightly lady in probably her late sixties had put us, the younger juniors, to shame when we had long walks or faced the challenges of going up staircases. Having assisted Buddhist Fellowship in their earlier statue and she being fluent in both English and Thai, was a tremendous help in communicating with the artist.

In the first meeting, the artist spared no effort in explaining the intricacies of Thai tradition and iconography of the Buddha statue. He started with a sketch drawing and proceeded thereafter to do up a small wax model in 3 dimension. While we wanted the Burmese tradition, some members expressed their desire for a more Chinese proportion, face and particularly the eyes. After two attempts, we realized that it was rather impossible or even inappropriate to try to put a Chinese proportioning system onto a Burmese Buddha.

As the original desired “Chinese Buddha eyes” were taken from a statue in a Kuantan temple (Pahang, Malaysia), a day trip led by Bro Tay Beng Yam was promptly made to visit the temple with the view to understand and possibly “copy” their statue which was originally crafted in China and more appropriately Mahayana in tradition. The temple, Pahang Buddhist Association, tucked in the remote quiet suburban of Kuantan is idyllic and we were instantly inspired by their main Buddha statue which is carved from a block of white marble by a China artist. We were warmly received during the trip and we concluded with the hope of having some exchange program in the near future with PBSS.

To resolve the conflicting issues of combining traditions, it was then decided by the committee that we shall replicate the Kuantan statue in all its entirety with exception of the robe and the lotus throne in which we hope to draw on the Burmese tradition without any conflict.

These were clearly communicated to the artist with photos and formalized instructions. However, like all artists, there is usually an eccentric part and for Mr Laem Sing, it seems to him that the iconography or rules for the proportioning of the Buddha statue is not something negotiable or adaptable. He also does not work with modern communication media such as digital photos or emails and would insist that we meet and talk face-to-face with him. In this process, we had inevitably built a warm link or connection with him. It was also at this juncture that Ms Vilai had to go ahead with her travel plans to do social work in India for a substantial period of time. Fortunately, her niece by the name Fon Chongco agreed to take over her role to help us follow up with the artist. Fon and her husband Kent has been following up since, without which, our recent milestone on the casting ceremony would have not been possible.

Getting the artist to create an exact replica of the Kuantan statue with modifications seemed a rather difficult task. Initially, I had my little doubts as to whether the artist would be able to move beyond the limitations of the Thai traditions. But later, as we get to see more of his works including some commissions to do Buddha statues for clients out of Thailand, we no longer had any doubt. In a one-off visit to a Buddhist museum in Korat, where Ms Vilai’s own brother is the Project Director, we got to see a statue of the well known Luangpor Koon on the roof of the museum. Though fully gold-leafed, the statue was truly life like and obviously an exact replica of the man himself.

During the initial trips, we had arranged to meet other artists but as it turned out, these artists appeared very commercial in the manner of the process that would be expected to complete the statue. For our experience with Mr Laem Sing, though apparently limited by the strict rules within their local traditions, this also meant that each of the process leading to the final casting and the completion are guided by their age-old traditions of statue making and bronze casting which includes their necessary local rites and rituals along the way, one of which was the ‘Dana’ offering to the Sangha, represented by 9 monks and prayers to Dharma protectors prior to the casting ceremony that was recently witnessed by our Singapore delegates.

Though it took 2 years to follow up with the artist, the real development only took place about 6 months prior to the casting ceremony. I believe this is in part due to the artist’s busy commitments to other jobs and secondly the closer relationship that was subsequently developed along the way. In a confident manner, the artist moved directly to the full size model without a small scale mock up as planned earlier. This was possible because unlike the earlier visits, we had now decided and demonstrated to him exactly what we wanted to see in our Buddha statue, including the size and the lotus throne. The final Buddha statue though modeled after the Kuantan statue, is clearly influenced by the Thai proportioning system. The Burmese robe has been super-imposed over the Mahayana robes and the face which represents the aspirations of PBSS members is left much to the artistic touch of our Thai artist.

Having close to completing this journey, one may ask; why all the fuss? It is important to remember that historically, the Buddha never allowed any of his disciples to have images made after him for veneration, when he was alive. And that continued for about 500 years after his passing away. For those disciples who wanted something to remember him, the Buddha said, “ If you see and practise my Teachings, you see Me”.

For some, who have walked this long arduous journey of self inner discovery, attachment to the form of the Buddha or more subtlely to the goal of Buddhahood is in itself a hindrance to the practitioner while to many others, such devotion to the representation of this ideal of Buddhahood or self-perfection is merely a skillful means from the ego to the egoless. Whatever the case maybe, many would concur that just as is said about art that “beauty lies in the eyes of the beholder”, in this context, “the sacredness of the Buddha statue lies in the minds of the practitioner”.

At the end of this journey, we have a unique Buddha statue that crosses 3 cultures or traditions in the making, a feat we should be proud of and reflect upon. It is said that the Dharma is a life raft on this ocean of samsara for all humanity who walks his path regardless of the label of one’s belief system. We only need to reflect upon the greatness and profoundness of the Buddha’s Teachings to truly see Him. But come January 2016, we shall get to see the final completed Buddha statue as it is, in solid brass and in our respective state of mind.

*The opinions expressed in this article is purely the author’s and do not reflect the position or view held by PBSS or the people involved in this process. The author is the architect for PBSS building project.